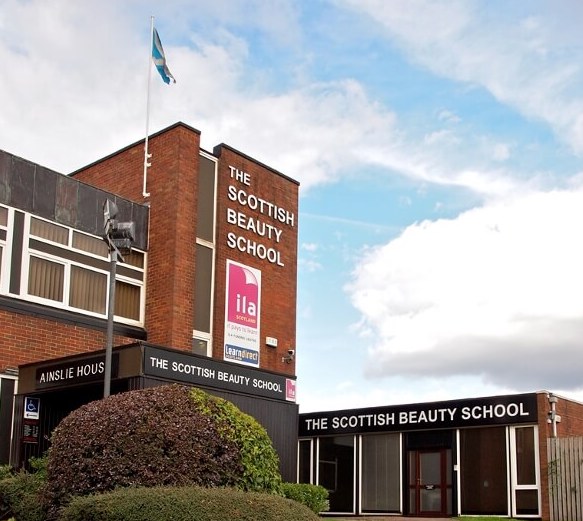 As beauty schools go in Scotland, The Scottish Beauty School is one of the most established and long-standing. Opened in June 2004 by Glasgow-based Liz Klineberg, some 8000 students have its completed beauty courses. And with courses in everything from acrylic nails and gel overlays to waxing and spray tanning, the school is the ideal springboard for those looking to enter the beauty industry in Scotland.

The school’s founder, Liz has 40 years of experience in the industry from operating and running her own salon to opening The Scottish Beauty School and over that time Liz has seen how the beauty world has changed. She says,

“It is now a lot easier to enter this industry as there is more demand for therapists who specialise in certain areas of beauty and nails and the variety of treatments that are now available. Over the years, beauty has now become accessible to everyone male and female. Owing to our current lifestyle and fast working pace everyone loves to be pampered and have that special time out and feel good factor. It used to be that you had to travel south of the border for training and certain treatments. Now, we have everything to offer here in Scotland with some of the best spas in the UK.”

Now, Liz, the school’s Principal Kay McDade and the 16 strong team are teaching beauty hopefuls on a wide variety of subjects.The school also includes a Nail Education training department, which is run by Liz’s daughter Toni, well recognised within the nail inductry and with her own range of nail art and nail products.

It might be hard work and a competitive industry but working as a beautician also offers the chance to be your own boss. And to be the best, it’s all about loving what you do. Liz says,

“A lot of our students are now running their own salons or a working as mobile therapists / working within beauty salons and spas, cruise liners, working as reps for beauty companies and in department stores advising on skin care and make-up, working as lecturers in colleges. A great makeup artist and therapist is someone who loves what they are doing who is totally committed to her or his profession and who continues to develop her skills to the highest level; a therapist who is also a people person.”

To find out more about The Scottish Beauty School and the courses, head to www.thescottishbeautyschool.co.uk 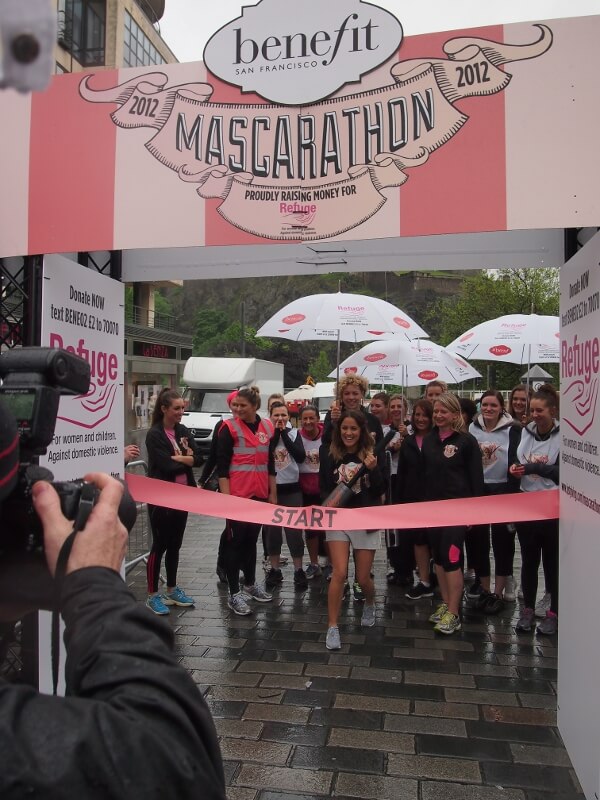 Running in the rain never looked so glamorous as the Benefit Mascarathon, lead by TV presenter Caroline Flack, kicked off in Edinburgh. The event is aiming to raise cash for domestic violence charity, Refuge. And running the first two miles was the I’m A Celebrity presenter along with some 30 runners, who despite the rain, pushed on. Warming up before the race, Caroline said,

“There’ll be no walking, I’m going to be running the two miles. The rain doesn’t bother me, it’s for a great cause and it’s such a privilege to be starting the Benefit Mascarathon.”

The rain didn’t dampen the spirits of the runners, who were all excited about starting the event and raring to go with a quick warm-up to get them going. And the bright pink Benebago brighten up the day as did the cheery makeup experts, the Benebabes, who were doing make-up, and dishing out bag-loads of Benefit goodies.

It’s the first stage in the charity run which goes over 500 miles and stops off in Newcastle, Manchester, Birmingham, and Cardiff before finishing in London on June 29th. Those taking part are running in relays and six female celebs have signed up to lead the different stages. Taking over from Caroline in Newcastle is Donna Air followed by Hollyoaks actress and Dancing On Ice runner-up, Jorgie Porter. TV presenter Alison Hammond is heading up the Birmingham to Cardiff section, Zoe Salmon is on the penultimate leg, and finishing up is Lauren Laverne.

Runners Caitlin Morrison and Caitlin Blake, seen here above, were looking forward to raising cash for the charity. And they said, they’d put in some hours at the gym in preparation for the Mascarathon. The pair, who are both 16, said,

“We’re really excited, it might be raining but that doesn’t matter. We’re both on the same relay leg so we’re going to run together. And we’ve been in the gym, training for today so hope it’s helped.”

Event organiser, Kyra Oates, said the Mascarathon had been about six months in the planning. The Benefit’s Promotions boss said that was the easy part but making it a reality was the tricky part due to the logistics and planning behind organising a run from Edinburgh to London. But she added, it will be well worth it for raising cash for charity Refuge. It’s hoped the event will raise over £50,000 for the domestic violence organisation.

Benefit’s makeup artist Lisa Potter-Dixon is taking part along the entire race and reckons just because you’re running doesn’t mean you have to forget about your makeup. The bubbly brunette said,

“Benefit has got plenty of running-friendly products so there’s no reason why you can’t look glamorous when you’re running. I recommend using the ‘They’re Real’ mascara. It won’t run no matter what the weather so it’s perfect for the Mascarathon. The Benetints are also great because they’re waterproof. I’m basically going to be running a marathon for this event and my makeup is coming with me.”

So good luck to all the runners and you can donate via the Mascarathon website or go to www.justgiving.com/mascarathon.

The Benebabes on hand to do makeovers 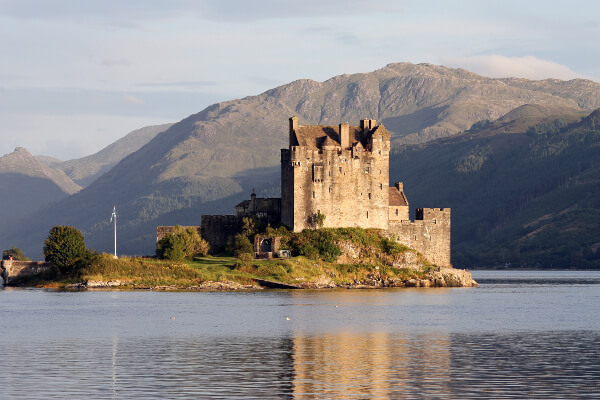 Things you can do in Earth Month

Given that this blog is called Scottish Beauty Blog, I’m guessing you’ll have figured out where I’m from. The land of forests, mountains, whisky and, of course, occasional rain: Scotland. It’s a pretty green country – both ecologically wise and landscape. But it’s still good to be reminded that we can do our bit to look after the world, lest we forget. That’s why I think Earth Day is a great idea. Started back in 1970, this year it takes place April 22 2012. It highlights environmental issues, campaigns and it’s now celebrated in over 175 countries – cue a well deserved and collective clap on the back. Subsequently, Earth Month, helpfully also assigned to April, has also taken root as eco-friendly events, promotions and campaigns spill out beyond one day. And specifically has seen the involvement of several beauty brands. So if you’re thinking ‘what can I do in Earth Month?’ then, outside of the usual environmentally-friendly ways, show your support through one of these beauty brands including Aveda and Origins.

Take Origins, who this year are giving customers an Origins Earth Day Bracelet. Wearers are to make a wish for Earth when they tie it to their wrist, which will come true when the bracelet breaks. And for every product purchased from Origins ‘A Perfect World’ range from 15th-28th April 2012, Origins will plant a tree on the customer’s behalf. And that’s not all, on April 21 2012 if you take along an empty an empty product container, Origins will recycle it in exchange for one of their limited-edition full-size moisturisers – either A Perfect World or Starting Over. How fantastic is that? For stockists call 0800 731 4039 or visit www.origins.co.uk

Also doing its bit for charity is hair brand Aveda who is launching The 2012 Light the Way™ candle, £16. When you buy one of these candles, all of your money goes to helping fund water-related projects. Aveda works with Global Greengrants Fund with millions funding local water projects around the world. Over the years, their support has helped hundreds of grassroots organizations to take action for clean, accessible water. This year, the Light the Way™ candle glass is made from 100% reclaimed bottles and from 100% certified organic ingredients including French lavender, lavandin and clary sage. It’s part of a wider company eco-friendly ethos which also sees Aveda rasing funds for WaterAid. And in 2012 Aveda’s fundraising will be supporting WaterAid projects in Ethiopia and Nepal, where extreme poverty is widespread and millions of people lack access to clean safe water.

Trees are the focus of the new Body Shop campaign called Wood Positive. The beauty and skincare brand has an ongoing commitment and not just for one day or one month to target specific areas t in biodiversity. So far, the Body Shop Wood Positive campaign, together with teaming up withThe World Land Trust has planted over 55,000 treas in the Ecuadorian Andes and Atlantic Rainforest in Brazil. This year it will be working with the World Land Trust to plant and protect more trees than it used in 2010. Kiehl’s has paired up with Trees for Cities and in a bid to raise some cash for the charity, it is releasing a limited edition re-design of the best-selling Ultra Facial Oil-Free Gel-Cream, £24. The container has been designed by British artist Margot Bowman. 100 percent net profits from the sales will go straight to the Trees for Cities charity, who are currently doing projects in eight UK cities that include new woodlands and street trees as well as educating school kids and offering professional qualifications to unemployed.

I recently read that we each use up to 150 liters of water every day. So if you’re looking for an immediate way to be eco-friendly – and I’m not talking about dispensing with showers – rather why not cut down your water usage. There are different ways for instance, turn off your tap between brushing your teeth, make your showers shorter and try using a dry shampoo. Batiste has a great range and with prices starting at £2.99 it’s possibly cheaper than water.